Successfully reported this slideshow.
We use your LinkedIn profile and activity data to personalize ads and to show you more relevant ads. You can change your ad preferences anytime.
[Defcon24] Introduction to the Witchcraft Compiler Collection 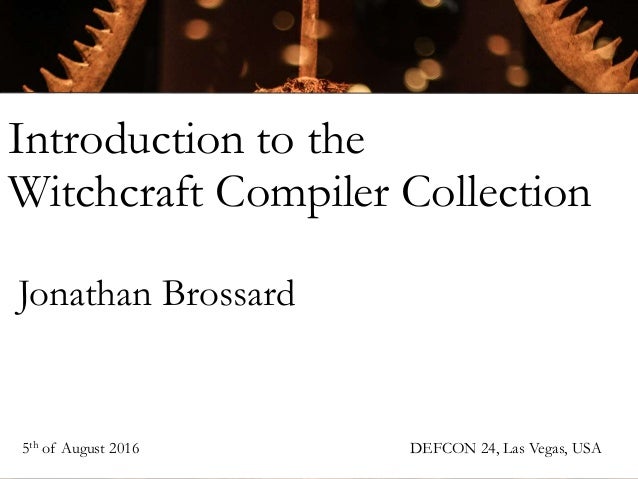 With this presentation, we take a new approach to reverse engineering. Instead of attempting to decompile code, we seek to undo the work of the linker and produce relocatable files, the typical output of a compiler. The main benefit of the later technique over the former being that it does work. Once achieved universal code ‘reuse’ by relinking those relocatable objects as arbitrary shared libraries, we'll create a form of binary reflection, add scripting capabilities and in memory debugging using a JIT compiler, to attain automated API prototyping and annotation, which, we will argue, constitutes a primary form of binary code self awareness. Finally, we'll see how abusing the dynamic linker internals shall elegantly solve a number of complex tasks for us, such as calling a given function within a binary without having to craft a valid input to reach it.

The applications in terms of vulnerability exploitation, functional testing, static analysis validation and more generally computer wizardry being tremendous, we'll have fun demoing some new exploits in real life applications, and commit public program profanity, such as turning PEs into ELFs, functional scripting of sshd in memory, stealing crypto routines without even disassembling them, among other things that were never supposed to work. All the above techniques have been implemented into the Wichcraft Compiler Collection, to be released as proper open source software (MIT/BSD-2 licenses) exclusively at DEF CON 24.

Jonathan Brossard is a computer whisperer from France, although he's been living in Brazil, India, Australia and now lives in San Francisco. For his first conference at DEF CON 16, he hacked Microsoft Bitlocker, McAffee Endpoint and a fair number of BIOS Firmwares. During his second presentation at DEF CON 20, he presented Rakshasa, a BIOS malware based on open source software, the MIT Technology review labeled "incurable and undetectable".

This year will be his third DEF CON ... Endrazine is also known in the community for having run the Hackito Ergo Sum and NoSuchCon conferences in France, participating to the Shakacon Program Committee in Hawaii, and authoring a number of exploits over the past decade. Including the first remote Windows 10 exploit and several hardcore reverse engineering tools and whitepapers. Jonathan is part of the team behind MOABI.COM, and acts as the Principal Engineer of Product Security at Salesforce.