Successfully reported this slideshow.
We use your LinkedIn profile and activity data to personalize ads and to show you more relevant ads. You can change your ad preferences anytime.
The architecture of mobile traffic map service 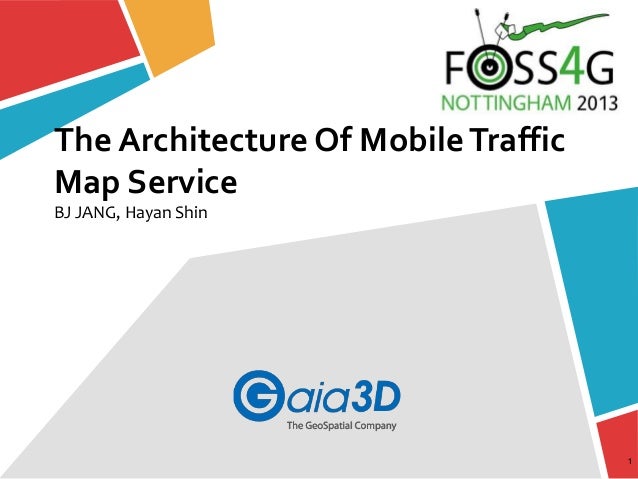 MOLIT(Ministry of Land, Infrastructure, and Transport) has established NTIC(National Transport Information Center) for effective management of various kinds of transportations in South Korea and released several services that people can use. Gaia3D Inc., has involved in one part of mobile service which displays traffic status on roads, streets, and highways up on geographical map, making people easily check the status of traffc wherever they’re heading. Gaia3D Inc., will introduce not only the experience of implementing mobile traffic map service (iPhone App, Android App, and Mobile Web Client) showing traffic on roads, streets, and highways at NTIC using Squid Proxy Server, GeoServer, and SQL Server but also advanced architecture coming up in 2014. NTIC system collects all kinds of real time traffic data of all highways, routes, streets, and roads in South Korea and divides those collected traffic data into three colors in green, yellow, and red by speed. These colorized traffic data are mashed up with map data to service on mobile devices. Servers carry out tiling traffic map in every 5 minutes and clients receive and display those tiled data. This system aimed at tolerating peak times of two major holiday seasons in South Korea - Chuseok(Korean Thanksgiving day) and Seolnal(Lunatic New Year’s day) when almost 15 million people per day travel at the peakest dat and about 8 million vehicels are poured out to roads, streets, and highways, so the system should be designed to safely handle over 100,000 concurrent connections. The whole system is consisted of two Cache Servers with Squid Proxy, six Map Server with GeoServer, and three Database Server with SQL Server. Real time traffic information and road lines are managed in SQL Server and provided to GeoServer. Traffic map tiles are produced in GeoServer and are passed to Cache Server. The client is designed to request tiles via interface of WMTS(Web Map Tile Service) protocol with Time Tag. The very initail architecture designed in 2012 somehow managed to endure traffic loads at peak times, but had some problems, which was quite disappointing and unexpected results. In order to improve the system, we’ve mainly focused on the enhancement of scalability. Also, we’ve newly redesigned the system into separating tile producing servers and managing static contents using NGINX web server.