Successfully reported this slideshow.
We use your LinkedIn profile and activity data to personalize ads and to show you more relevant ads. You can change your ad preferences anytime.
Increase Your Sales With ZoomCharts 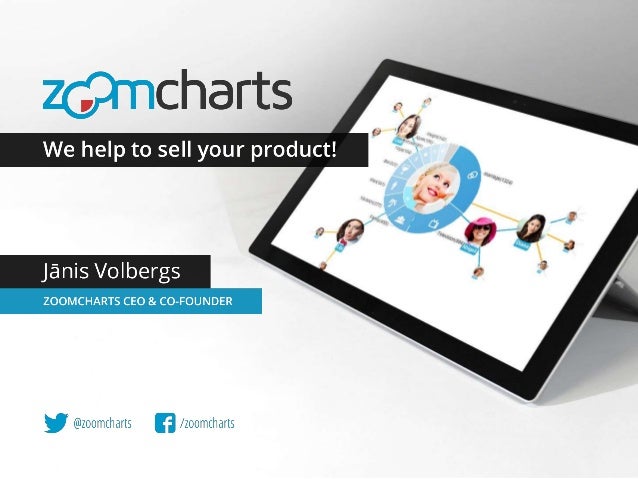 Increase Your Sales With ZoomCharts

ZoomCharts CEO and Co-Founder Janis Volbergs gave an engaging presentation on the startup path from idea, to market, to investment, and what it takes to build a product from the ground up and take it to a new level.

How did it all start?

A problem was spotted. There were no visualization libraries delivering truly interactive charts for touch enabled devices that were capable of working with big data.

And so the idea emerged. This was the right time to build such a library.

Because touch screen displays will become a $31.9 billion dollar market by 2018. Smart mobile sensor devices were used by 1.75 billion people in 2014. The Big Data market will grow exponentially (from $8.8 billion in 2013), to $48 billion in 2018. HTML5 adoption is wide enough and touch enabled devices are powerful enough to generate interactive visualizations.

The ingredients for a successful startup include:

1. A grand vision. ZoomCharts’ vision is to become the number one SDK for interactive chart development in web and mobile apps.
2. A realistic plan for execution and getting your vision implemented.
3. (Most importantly) A team, able to see the grand vision and execute the plan.

ZoomCharts started small, but focused. A vision was set, a core team of professionals was assembled, and a detailed business plan was derived, which led to a €200,000 seed investment.

The product was created in less than a year, and launched public downloads and a shop in March 2014.

ZoomCharts started with a €0 investment in dedicated marketing. A follow up investment of €500,000 raised in November 2014 enabled us to scale our team from 3 to 11, and get us moving forward fast.

Today, the ZoomCharts team has grown from 3 to 11, and has raised a total investment of €700,000. We’ve reached 40 paying customers, and growing, and there have been over 700 trials started, and growing.

Current challenges include brand building, marketing and sales, and incorporation into the US, including patents.

Despite the challenges, ZoomCharts is excited about the company’s future, which includes plans such as:

1. Raise €5-7 million to massively expand sales and marketing.
2. Expand the team to 40+ within the next two years.
3. Launch multiple SAAS solutions that would let a much wider audience take advantage of the benefits ZoomCharts provides.

Increase Your Sales With ZoomCharts