Successfully reported this slideshow.
We use your LinkedIn profile and activity data to personalize ads and to show you more relevant ads. You can change your ad preferences anytime.
The Brain - Thought Broadcasting and Receiving Station 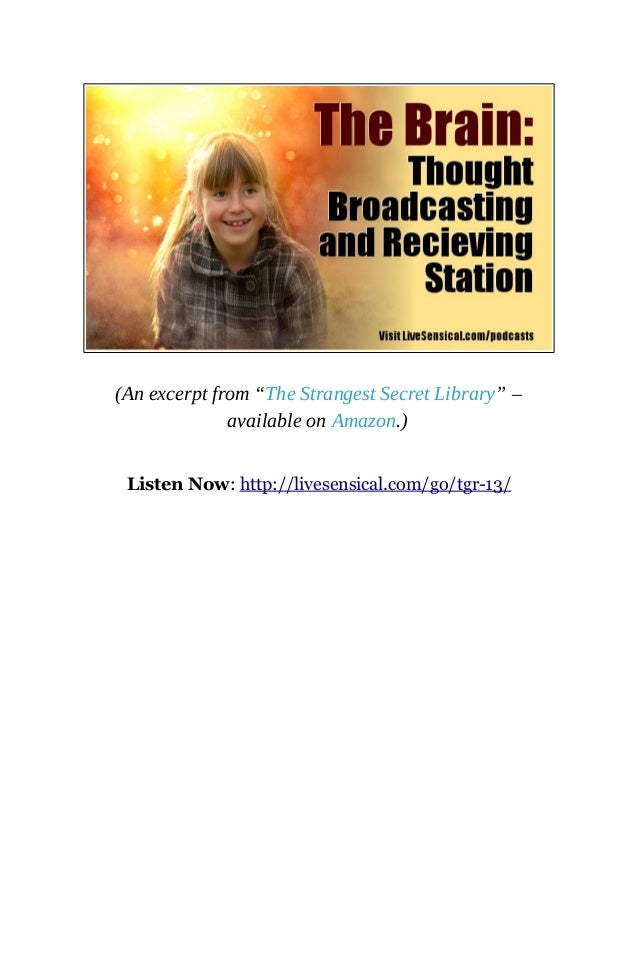 An excerpt from the bestseller
“Think and Grow Rich”
Edited by Robert C. Worstell
The Twelfth Step toward Riches
MORE than twenty years ago, the author, working in conjunction with the late Dr. Alexander Graham Bell, and Dr. Elmer R. Gates, observed that every human brain is both a broadcasting and receiving station for the vibration of thought. Through the medium of the ether, in a fashion similar to that employed by the radio broadcasting principle, every human brain is capable of picking up vibrations of thought which are being released by other brains.
In connection with the statement in the preceding paragraph, compare, and consider the description of the Creative Imagination, as outlined in the chapter on Imagination. The Creative Imagination is the “receiving set” of the brain, which receives thoughts, released by the brains of others. It is the agency of communication between one’s conscious, or reasoning mind, and the four sources from which one may receive thought stimuli.
When stimulated, or “stepped up” to a high rate of vibration, the mind becomes more receptive to the vibration of thought which reaches it through the ether from outside sources. This “stepping up” process takes place through the positive emotions, or the negative emotions. Through the emotions, the vibrations of thought may be increased.
Vibrations of an exceedingly high rate are the only vibrations picked up and carried, by the ether, from one brain to another. Thought is energy traveling at an exceedingly high rate of vibration. Thought, which has been modified or “stepped up” by any of the major emotions, vibrates at a much higher rate than ordinary thought, and it is this type of thought which passes from one brain to another, through the broadcasting machinery of the human brain.
The emotion of sex stands at the head of the list of human emotions, as far as intensity and driving force are concerned. The brain which has been stimulated by the emotion of sex, vibrates at a much more rapid rate than it does when that emotion is quiescent or absent.
The result of sex transmutation, is the increase of the rate of vibration of thoughts to such a pitch that the Creative Imagination becomes highly receptive to ideas, which it picks up from the ether. On the other hand, when the brain is vibrating at a rapid rate, it not only attracts thoughts and ideas released by other brains through the medium of the ether, but it gives to one’s own thoughts that “feeling” which is essential before those thoughts will be picked up and acted upon by one’s subconscious mind.