Successfully reported this slideshow.
We use your LinkedIn profile and activity data to personalize ads and to show you more relevant ads. You can change your ad preferences anytime.
Ratio of harmful amino acid substitutions: Case studies of BTK and MMR system - Mauno Vihinen 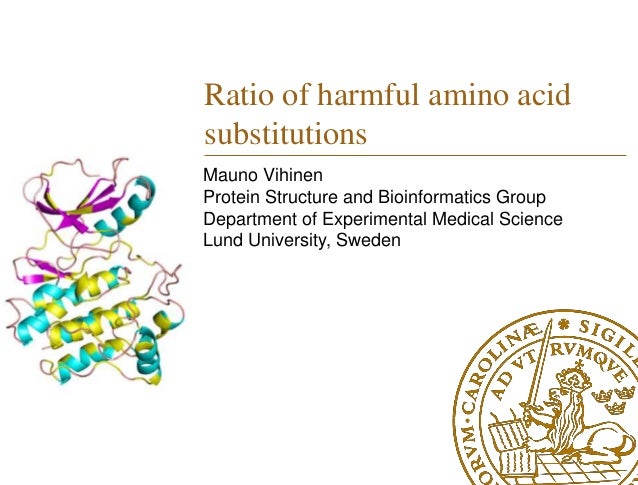 Numerous disease-causing and neutral variations have been identified in several genes and proteins. To gain insight into the total number of harmful variations we have performed protein-wide predictions for Bruton tyrosine kinase (BTK) involved in primary immunodeficiency and mismatch repair (MMR) system proteins in gastric cancers. Mutation rates have been measured and estimated for certain proteins, however, are not very useful in this respect as the rates are known to vary by 100 fold depending on the gene.

We developed dedicated predictors both for the BTK, called PONBTK (1), and for four MMR proteins, called PON-MMR2 (2). The methods were carefully evaluated before used for the analyses. They both have very good performance according to several measures. In the case of BTK kinase domain we found that altogether two thirds of all the possible single-nucleotide substitution-caused amino acid variations (SNAVs) are harmful. In the case of the MMR proteins, where all the possible substitutions i.e. 19 per position, were investigated the ratios are somewhat smaller than for BTK and different for individual proteins. Predictions with PON-P2 (3), a generic pathogenicity predictor, indicate very different ratios of harmful variants in proteins. PON-P2 is very suitable for this kind of analysis due to its high performance and ability to distinguish harmful variants. We have applied this approach to all the 22 mitochondrial tRNA molecules by using our novel PON-mt-tRNA predictor (4). Several mechanisms are behind the harmful variants. When developing a new predictor for protein solubility affecting variants (PON-Sol, 4), we tested the method on interleukin 1-β and found structure context dependent distribution differences for the solubility increasing and decreasing variants.

Knowledge about harmful variants in genes and proteins allows deeper insight into diseases and when combined with other information, such as protein structures, understanding the mechanisms behind diseases due to variants.

All the tools mentioned are freely available at http://structure.bmc.lu.se/