Successfully reported this slideshow.
We use your LinkedIn profile and activity data to personalize ads and to show you more relevant ads. You can change your ad preferences anytime.
Publishers Paradox: Information Overload 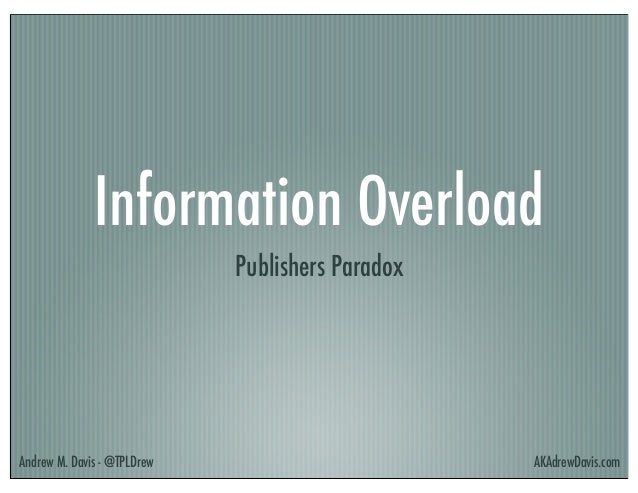 The Paradox:
Just because there is more information available does not mean one can consume more.
An average of 17 webpages are published every single second. In the time it takes you to read this article 4,080 new webpages will be indexed, promoted, optimized, and set free on the world wide web.
Every new article we publish contributes to information overload.

Evolution of Overload
The Early Years
Step back, for just a minute, and imagine the media world we inhabited in the 1950’s. In 1950 there wasn’t much of a gap between the information we perceived was available to us and the information we actually consumed. In 1950 one might have subscribed to a local newspaper, listened to one’s favorite radio station, subscribed to a few monthly magazines, and tuned into a television network each night. While you were aware of the other options in the media marketplace the selection was manageable and one must have found it easy to decide what content to consume and what to consciously ignore.

The 200-Channel Universe
By the 1990’s the gap between the information one actually consumed and the information one perceived was available begins to widen with the cable television explosion. Remember the discussions surrounding “the 200-channel universe?” In the 1990’s we saw the debut of networks like CNN International, CNNSI, CNN HLN, CNBC, MSNBC, FoxNews, ESPN, ESPN2, ESPN Classic, ESPNU… the list goes on and on. Consumers found themselves channel-surfing more than ever before, wondering what they were missing on ESPN2 if they were tuned into ESPN.

The Information Super-Highway
The content explosion on the Internet has only intensified our consumers’ perception that no matter how much they read, watch, or listen, they’re missing valuable content someone else has consumed.
Ironically, no matter how much one might try, the information one is physically capable of consuming has an upper limit - a plateau. Our audience is forced to choose which information they will build a relationship with and which content they’ll ignore.

The Perceived Opportunity
As publishers, we’re contributing to information overload. Here’s why: we’re chasing more eyeballs, more often. Fundamentally, we believe that the more often we publish - the more often we shove information down our audience’s throat the more they’ll consume. We aren’t the only ones doing this. Marketers are also chasing the social stream. Sending more e-mails, publishing more Facebook updates and tweets. It’s time we stopped chasing the perceived opportunity and focused our energy on creating content our audience actually wants to consume.