Successfully reported this slideshow.
We use your LinkedIn profile and activity data to personalize ads and to show you more relevant ads. You can change your ad preferences anytime.
Ritsuko Nakajima - Open Access and J-STAGE 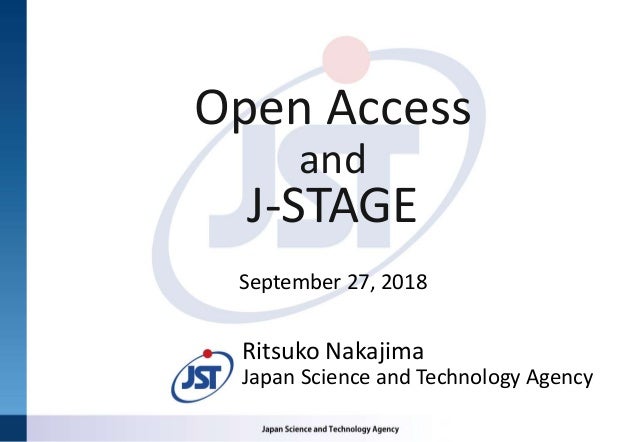 Although the increase of open access publications is noticeable, the distribution of these titles among countries is not homogeneous; two contexts stand out. On the one hand, there are countries with an important tradition in commercial publishing, especially in the USA, UK, the Netherlands and Germany, and whose advance toward open access depends on business models that ensure the financial returns to large publishers; and on the other, there are mainly the emerging economies, whose journals do not draw much commercial interest, being mostly published in open access. Between these two environments, there are also national initiatives in developed countries that publish journals outside the commercial circuit of the large publishers.

In this scenario, Latin America is known to be one of the most advanced regions of the world to use the open access publishing model as a strategy to increase the visibility of the scientific output in the countries of the region. This protagonism is largely driven by national and regional initiatives, underlining the pioneering SciELO, which, through its decentralized model, promoted and developed a network of national collections of open access journals, focusing on each countries’ conditions and priorities. In most of these countries the collections reflect the implementation of public policies supporting research infrastructure and its communication, with emphasis on nationally published journals.

Through similar solutions, other countries have also highlighted the importance of nationally published journals for their national research systems, and have been making efforts to develop national open access journals collections (France, Serbia, and Japan, among others) as one of the essential components of their strategies of active participation in the global flow of scientific output and scholarly communication.

In view of the above, this panel will analyze the main characteristics of the most relevant national solutions, advances already achieved, barriers and challenges toward…