Successfully reported this slideshow.
We use your LinkedIn profile and activity data to personalize ads and to show you more relevant ads. You can change your ad preferences anytime.
The Apollo and GraphQL Stack 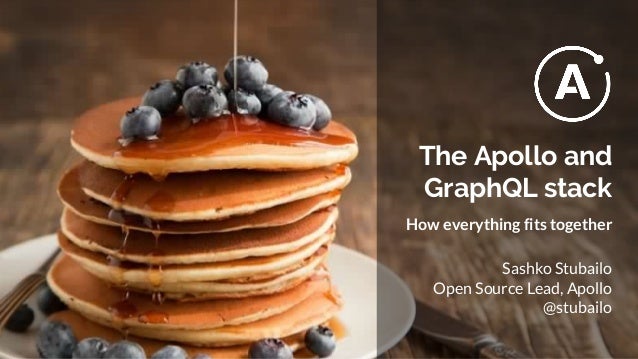 The Apollo and GraphQL Stack

GraphQL is a wonderful abstraction for describing and querying data. Apollo is an ambitious project to help you build apps with GraphQL. In this talk, we'll go over how all the parts—Client, Server, Dev Tools, Codegen, and more—create an end-to-end experience for building apps on top of any data.

In today's development ecosystem, there are tons of options for almost every part of your application development process: UI rendering, styling, server side rendering, build systems, type checking, databases, frontend data management, and more. However, there's one part of the stack that hasn't gotten as much love in the last decade, because it usually falls in the cracks between frontend and backend developers: Data fetching.

The most common way to load data in apps today is to use a REST API on the server and manage the data manually on the client. Whether you're using Redux, MobX, or something else, you're usually doing everything yourself—deciding when to load data, how to keep it fresh, updating the store after sending updates to the server, and more. But if you're trying to develop the best user experience for your app, all of that gets in the way; you shouldn't have to become a systems engineer to create a great frontend. The Apollo project is based on the belief that data loading doesn't have to be complicated; instead, you should be able to easily get the data you want, when you want it, and it should be managed for you just like React manages updating your UI.

Because data loading touches both the frontend and backend of your app, GraphQL and Apollo have to include many parts to fulfill that promise of being able to seamlessly connect your data together. First, we need client libraries not only for React and JavaScript, but also for native iOS and Android. Then, we must bring server-side support for GraphQL queries, mutations, and most recently subscriptions to every server technology and make those servers easier to write. And finally, we want not only all of the tools that people are used to with REST APIs, but many more thanks to all of the capabilities enabled by GraphQL.

The Apollo and GraphQL Stack