Successfully reported this slideshow.
We use your LinkedIn profile and activity data to personalize ads and to show you more relevant ads. You can change your ad preferences anytime.
San Francisco ~ USA 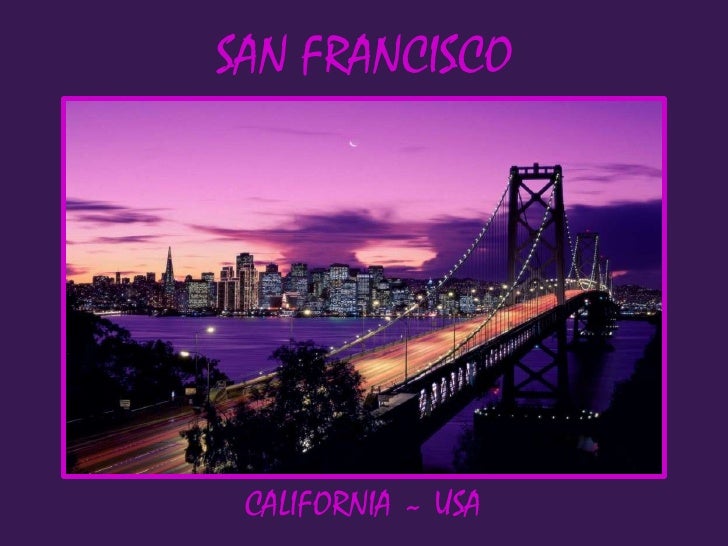 San Francisco in California, USA is the financial, cultural, and transportation centre of the San Francisco Bay Area, a region of 7.5 million people which includes San Jose and Oakland.

In 1776, colonists from Spain established a fort at the Golden Gate and a mission named for Francis of Assisi on the site. The California Gold Rush of 1849 propelled the city into a period of rapid growth, increasing the population in one year from 1,000 to 25,000, and thus transforming it into the largest city on the West Coast at the time. After three-quarters of the city was destroyed by the 1906 earthquake and fire, San Francisco was quickly rebuilt, hosting the Panama-Pacific International Exposition nine years later. During World War II, San Francisco was the port of embarkation for service members shipping out to the Pacific Theater. After the war, the confluence of returning servicemen, massive immigration, liberalizing attitudes, and other factors (Vietnam) led to the Summer of Love and the gay rights movement, cementing San Francisco as a centre of liberal activism in the United States.

Today, San Francisco is one of the top tourist destinations in the world, ranking 35th out of the 100 most visited cities worldwide, and is renowned for its chilly summer fog, steep rolling hills, eclectic mix of architecture, and its famous landmarks, including the Golden Gate Bridge and cable cars. The city is also a principal banking and finance centre, and the home to more than 30 international financial institutions, helping to make San Francisco rank 18th in the world's top producing cities, eighth in the United States, and twelfth place in the top twenty global financial centers.

The song 'San Francisco' (Be Sure to Wear Flowers in Your Hair) is a song, written by John Phillips of The Mamas & the Papas, and sung by Scott McKenzie.
It was written and released in 1967 to promote the Monterey Pop Festival. By June 1967, it commanded the number four spot on the Billboard Hot 100 in the United States. Meanwhile, the song rose to number one in the United Kingdom and most of Europe. The single is purported to have sold over 7 million copies worldwide. The song is credited with bringing thousands of young people to San Francisco, California during the late 1960s.
In Central Europe, young people adopted 'San Francisco' as an anthem for freedom, and it was widely played during Czechoslovakia's 1968 Prague Spring uprising.