Successfully reported this slideshow.
We use your LinkedIn profile and activity data to personalize ads and to show you more relevant ads. You can change your ad preferences anytime.
Role of evolutionary psychology in consumer behaviour 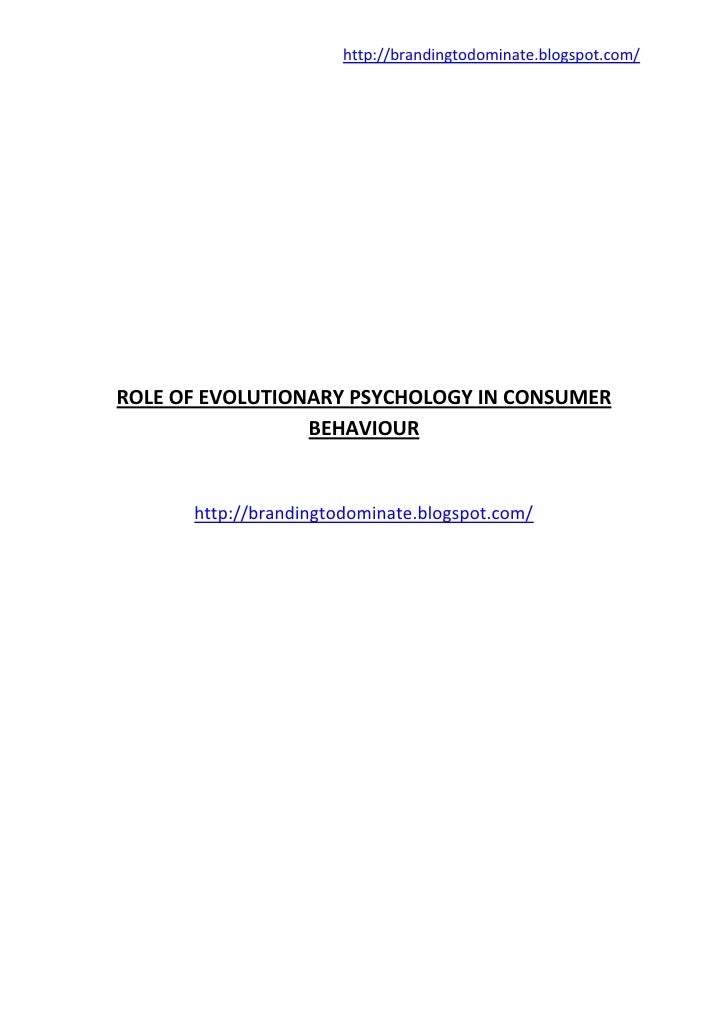 Almost one and a half century ago, Darwin presented his natural selection and inclusive fitness theory, which has provided valuable insights into marketing in general and consumer behavior in particular. From this perspective, human mind which controls psychological mechanisms, is in fact shaped up and influenced by the evolutionary ancestors.

Evolutionary psychology (EP) posits that human mind is evolved over millions of years and the human behavior is largely inherited through genes. Consumer behavior which is an important marketing-related aspect needs to be studied with ultimate explanations rather than proximate. Thus, to study the consumer behavior, it is imperative for marketers to understand it from the evolutionary psychology perspective, instead of ‘standard social science model’ (SSSM), as the psychological mechanisms of consumers are not only influenced by the surroundings and environment they live in, but also the surroundings and adaptive problems their ancestors faced.

EP is considered very much relevant to consumer behavior by various psychologists and marketers. EP is very powerful, in the sense that it examines and points out the critical reasons for human behavior in various contexts – altruism, kin selection, gender differences, food preferences, differences in preferences for potential mates, landscape preferences, standards of physical attractiveness, and spatial abilities.

EP can provide marketers with insights into cultural similarities and differences which prove to be valuable for firms targeting customers across borders; the significance of certain colors, preferential attributes in potential mates, and gift-giving attitude exists in many countries irrespective of their cultures. Moreover, EP psychologists explained why advertisements that portrayed young and naked girls were successful to generate positive sexual stimuli in men, and why they do not work for female customers.

Though, humans engage in several activities to maximize their benefits, yet they demonstrate self-harmful behaviors by indulging into activities that are injurious to health, for instance sun tanning, smoking and binge drinking. Understanding what drives them to indulge into such activities and what motivates them to buy such products or services even after knowing their harmful effects, marketers may be better able to develop effective and persuasive messages.

Understanding evolutionary psychology in regards to consumer behavior, and valuing its significance is important to develop an effective marketing strategy. Just as it is indispensable in biology, EP might be viewed in coming decades as something which is essential for marketers as well to study consumer behavior and to suggest valuable implications.