Successfully reported this slideshow.
We use your LinkedIn profile and activity data to personalize ads and to show you more relevant ads. You can change your ad preferences anytime.
Cloudy with a Chance of Bundles (and non java components) - R Nicholson & T Ward 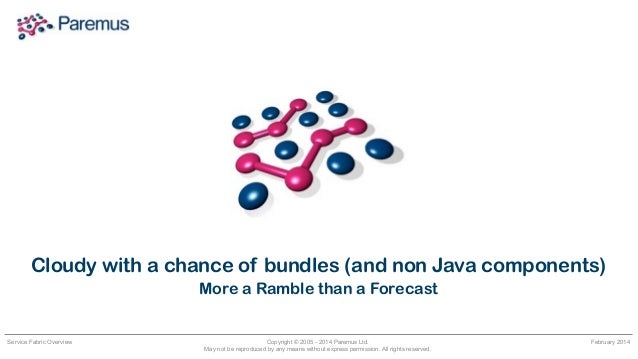 Maintainable, adaptive Systems must be modular in nature. Hence OSGi, the open industry standard for modularity, provides the ideal foundations upon which the next generation of lightweight, adaptive public and private Cloud platforms and hosted applications can be built.

The talk will explore some of the current OSGi Alliance activities with respect to distributed computing, Cloud runtimes and the extension of OSGi concepts to more traditional software artifacts; specifically dynamic resolution, requirements and capabilities, remote services and semantic versioning.

Consideration will be given to the Operational benefits that can be derived from from adopting a modular approach to Cloud rather than the typical virtual machine based solutions that do nothing to address the complexity and technical debt that has been accrued over the years.

The talk will conclude with a demonstration of the Service Fabric, the industries first distributed OSGi cloud runtime, where the above concepts will be demonstrated.

Bios:
Richard Nicholson
In 2004, Richard, as Founder and CEO of Paremus, set the goal of building a truly adaptive & robust "Cloud runtime". Focussing on modularity and dynamic assembly as fundamental requirements, OSGi was adopted and the Paremus Service Fabric was the result. Richard, a Physicist by training, maintains keen interest in a number of research areas including Complexity and Complexity Adaptive Systems and Recovery Oriented techniques and their implications for the design of distributed self-maintaining systems.

Prior to founding Paremus in 2001, Richard headed the European Engineering function for Salomon Smith Barney/Citigroup, and was responsible for the delivery of the IT infrastructure for the Citigroup Canary Wharf facility. Richard graduated from Manchester University with Honors in Physics and went on to gain an Astrophysics doctorate from the Royal Greenwich Observatory.

Tim Ward
Tim is a Senior Consulting Engineer and Trainer at Paremus, a co-author of Enterprise OSGi in Action, and has been actively working with OSGi for over six years. Tim has been a regular participant in the OSGi Core Platform and Enterprise Expert Groups, and led the development of several specifications, including OSGi Promises and Asynchronous Services. Tim is also an active Open Source committer and a PMC member in the Apache Aries project, which provides a container for enterprise OSGi applications.