Successfully reported this slideshow.
We use your LinkedIn profile and activity data to personalize ads and to show you more relevant ads. You can change your ad preferences anytime.
ZFS 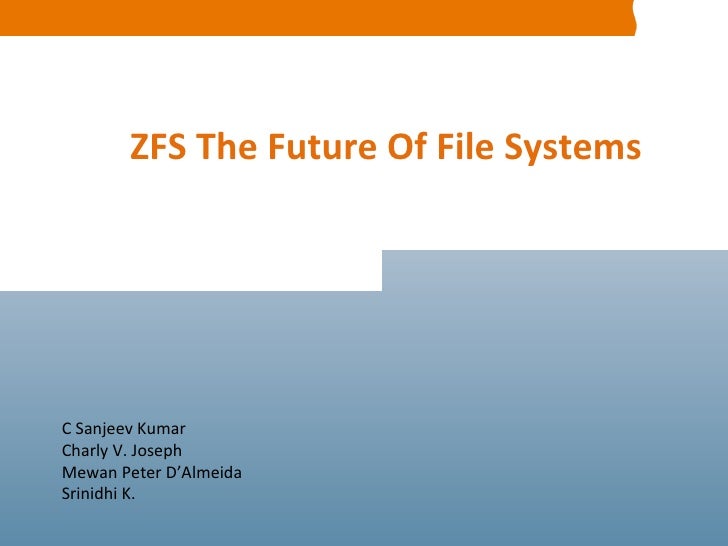 In computing, ZFS is a combined file system and logical volume manager designed by Sun Microsystems, a subsidiary of Oracle Corporation. The features of ZFS include support for high storage capacities, integration of the concepts of file system and volume management, snapshots and copy-on-write clones, continuous integrity checking and automatic repair, RAID-Z and native NFSv4 ACLs. Unlike traditional file systems, which reside on single devices and thus require a volume manager to use more than one device, ZFS file systems are built on top of virtual storage pools called zpools. A zpool is constructed of virtual devices (vdevs), which are themselves constructed of block devices: files, hard drive partitions, or entire drives, with the last being the recommended usage.[7] Thus, a vdev can be viewed as a group of hard drives. This means a zpool consists of one or more groups of drives.
In addition, pools can have hot spares to compensate for failing disks. In addition, ZFS supports both read and write caching, for which special devices can be used. Solid State Devices can be used for the L2ARC, or Level 2 ARC, speeding up read operations, while NVRAM buffered SLC memory can be boosted with supercapacitors to implement a fast, non-volatile write cache, improving synchronous writes. Finally, when mirroring, block devices can be grouped according to physical chassis, so that the filesystem can continue in the face of the failure of an entire chassis. Storage pool composition is not limited to similar devices but can consist of ad-hoc, heterogeneous collections of devices, which ZFS seamlessly pools together, subsequently doling out space to diverse file systems as needed. Arbitrary storage device types can be added to existing pools to expand their size at any time. The storage capacity of all vdevs is available to all of the file system instances in the zpool. A quota can be set to limit the amount of space a file system instance can occupy, and a reservation can be set to guarantee that space will be available to a file system instance.