Successfully reported this slideshow.
We use your LinkedIn profile and activity data to personalize ads and to show you more relevant ads. You can change your ad preferences anytime.
Philippine Q3 Market Update: Create New CBDs to Decongest Metro Manila 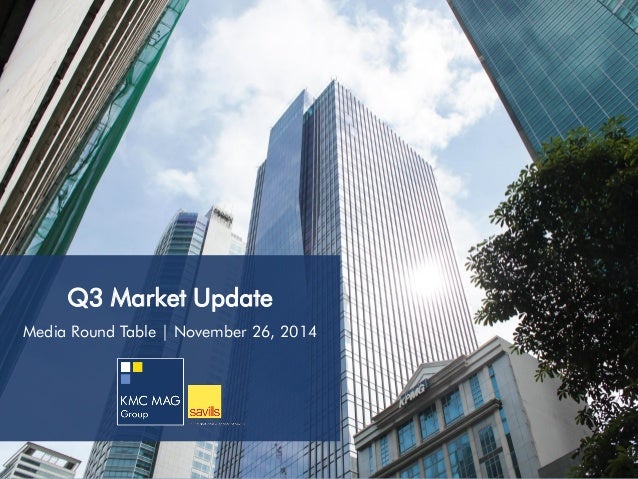 Decongesting Metro Manila, building necessary infrastructure
critical to sustaining growth
The Philippines' continuing economic growth has enabled it to become one of the more popular
investment destinations in Southeast Asia. While other countries are still recovering from the
effects of the 2008 financial crisis, the Philippines has grown steadily, posting 6.2% growth for the
2nd quarter of 2014 and getting credit rating updates from key international debt-watchers
Standard & Poor’s, Fitch, and Moody’s.
In its 3rd Quarter Report, real estate services agency KMC MAG Group noted that the Philippines
will need to focus on two key issues—decongesting Metro Manila and building the necessary
infrastructure—in order to stay ahead and to sustain the momentum it currently enjoys. “The
long-term economic growth of the Philippines is dependent on whether or not it can address the
issue of decongestion and make smart, sustainable decisions to improve its infrastructure,” said
Michael McCullough, Managing Director of KMC MAG Group. “If the Philippines can bring the
growth in Manila to other areas within the country and support that with infrastructure, then we
see no reason why it wouldn’t fulfill its promise of being the next Asian miracle.”

The real estate services agency highlighted that efforts to decongest have become more visible,
with business parks and special economic zones being built in provinces outside Metro Manila,
such as Cavite, Laguna, and Batangas, and in areas outside of Luzon, such as Cebu, Davao,
Cagayan de Oro, and Zamboanga.

Meanwhile, within Metro Manila, developers are exploring Quezon City and Bay City as potential
central business districts, which could potentially spread out job opportunities, foot traffic, and
even investments more evenly within Metro Manila. McCullough noted that Quezon City has
shown a lot of potential, given its size, the presence of government institutions, educational
institutions, and major broadcasting networks, and its extensive road and railway network.
Another area that could potentially develop into a business district is Bay City, the reclaimed area
located near Roxas Boulevard on Manila Bay, which currently houses the Mall of Asia and
Entertainment City. Bay City is also the site of various business parks, such as Aseana Holdings
Inc.-backed Aseana City, the SM-backed Future City, and the Metrobank Group-backed
Metropolitan Park.

“Previous investments by the government and the private sector have shown that these areas can
grow into central business districts,” shared McCullough. “For both Quezon City and Bay City, it
will be critical to provide more public transport options and ensure that social services are in
place for these two areas to fully develop.”