Successfully reported this slideshow.
We use your LinkedIn profile and activity data to personalize ads and to show you more relevant ads. You can change your ad preferences anytime.
A Contribution to the Critique of the Political Economy of Academic Labour 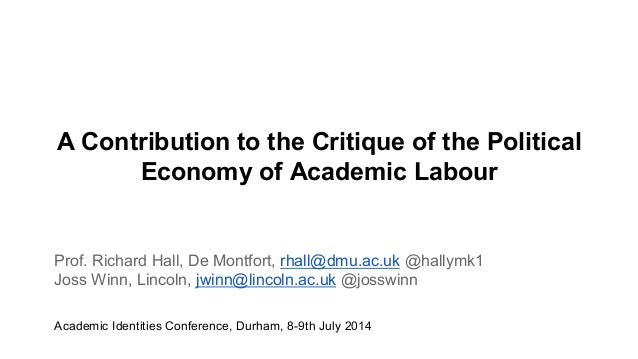 In this paper we analyse ‘academic labour’ using categories developed by Marx in his critique of political economy. In doing so, we return to Marx to help understand the work of academics as productive living labour subsumed by the capitalist mode of production. In elaborating our own position, we are critical of two common approaches to the study of academic labour, especially as they emerge from inside analyses of 'virtual labour' or 'digital work' (Fuchs and Sevignani, 2013; Newfield, 2010; Roggero, 2011).

First, we are critical of efforts to define the nature of our work as ‘immaterial labour’ (Hardt and Negri, 2000; Peters and Bulut, 2011; Scholtz, 2013) and argue that this category is an unhelpful and unnecessary diversion from the analytical power of Marx’s social theory and method. The discourse around ‘immaterial labour’ raised by the Autonomist or Operaismo tradition is thought-provoking, but ultimately adds little to a critical theory of commodity production as the basis of capitalist social relations (Postone, 1993; Sohn-Rethel, 1978). In fact they tend to overstate network-centrism and its concomitant disconnection from the hierarchical, globalised forces of production that shape our objective social reality (Robinson, 2004).

Second, we are cautious of an approach which focuses on the digital content of academic labour (Noble, 2002; Weller, 2012) to the neglect of both its form and the organising principles under which it is subsumed (Camfield, 2007). Understandably, academics have a tendency to reify their own labour such that it becomes something that they struggle for, rather than against. However, repeatedly adopting this approach can only lead to a sense of helplessness (Postone, 2006). If, rather, we focus our critique on the form and organising principles of labour, we find that it shares the same general qualities whether it is academic or not. Thus, it is revealed as commodity-producing, with both concrete and abstract forms. By remaining focused on the form of labour, rather than its content, we can only critique it rather than reify it.

This then has implications for our understanding of the relationships between academics and virtual work, the ways in which technologies are used to organise academic labour digitally, and struggles to overcome such labour. It is our approach to conceive of ‘academic labour’ in both its concrete and abstract forms and in relation to a range of techniques and technologies. The purpose of this is to unite all workers in solidarity against labour (Krisis-Group, 1999), rather than against each other in a competitive labour market.