Successfully reported this slideshow.
We use your LinkedIn profile and activity data to personalize ads and to show you more relevant ads. You can change your ad preferences anytime.
The Power of Hierarchical Thinking - Ray Kurzweil - H+ Summit @ Harvard 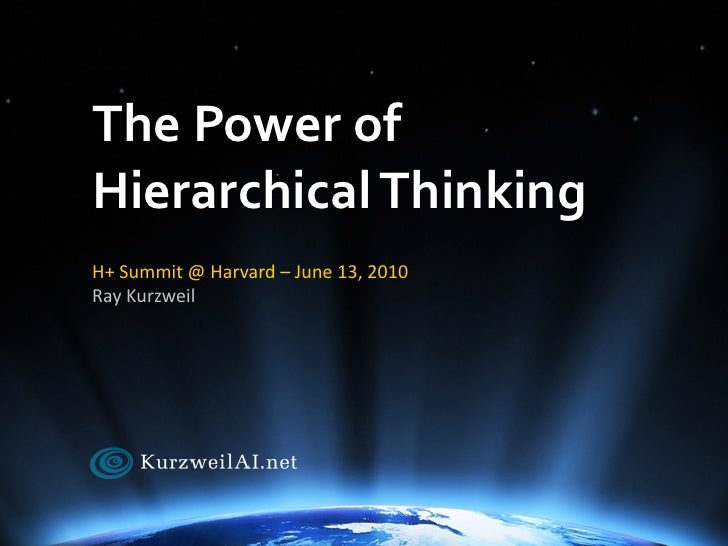 What does it mean to understand the brain? Where are we on the roadmap to this goal? What are the effective routes to progress - detailed modeling, theoretical effort, improvement of imaging and computational technologies? What predictions can we make? What are the consequences of materialization of such predictions - social, ethical? Kurzweil will address these questions and examine some of the most common criticisms of the exponential growth of information technology including criticisms from hardware ("Moore's Law will not go on forever"), software ("software is stuck in the mud"), the brain ("the brain is too complicated to understand or replicate"), ontology ("software is not capable of thinking or of consciousness"), and promise versus peril ("biotechnology, nanotechnology, and artificial intelligence are too dangerous").

There is now a grand project comprising at least a hundred thousand scientists and engineers working in diverse ways to understand the best example we have of an intelligent process: the human brain. It is arguably the most important project in the history of the human-machine civilization. The goal of the project is to understand precisely how the human brain works, and then to use these revealed algorithms as a basis for creating even more intelligent machines.

As we learn the algorithms underlying human intelligence, we will similarly be able to engineer it to vastly extend the powers of our intelligence. Indeed this process is already well under way. There are literally hundreds of tasks and activities that used to be the sole province of human intelligence that can now be conducted by computers usually with greater precision and vastly greater scale.

Was it inevitable that a species would evolve that is capable of creating its own evolutionary process in the form of intelligent technology? Kurzweil will argue that it was.

According to my models we are only two decades from fully modeling and simulating the human brain. By the time we finish this reverse-engineering project, we will have computers that are millions of times more powerful than the human brain. These computers will be further amplified by being networked into a vast world wide cloud of computing. The algorithms of intelligence will begin to self-iterate towards ever smarter algorithms.

This is how we will address the grand challenges of humanity such as maintaining a healthy environment, providing for the resources for a growing population including energy, food, and water, overcoming disease, vastly extending human longevity, and overcoming poverty. It is only by extending our intelligence with our intelligent technology that we can handle the scale of complexity to address these challenges.

Ray Kurzweil has been described as "the restless genius" by the Wall Street Journal, and "the ultimate thinking machine" by Forbes. Inc. magazine ranked him #8 among entrepreneurs in the United States, calling him the "rightful heir to Thomas Edison", and PBS included Ray as one of 16 "revolutionaries who made America", along with other inventors of the past two centuries.

As one of the leading inventors of our time, Ray was the principal developer of the first CCD flat-bed scanner, the first omni-font optical character recognition, the first print-to-speech reading machine for the blind, the first text-to-speech synthesizer, the first music synthesizer capable of recreating the grand piano and other orchestral instruments, and the first commercially marketed large-vocabulary speech recognition. Ray's web site Kurzweil AI.net has over one million readers.

Among Ray's many honors, he is the recipient of the $500,000 MIT-Lemelson Prize, the world's largest for innovation. In 1999, he received the National Medal of Technology, the nation's highest honor in technology, from President Clinton in a White House ceremony. And in 2002, he was inducted into the National Inventor's