Successfully reported this slideshow.
We use your LinkedIn profile and activity data to personalize ads and to show you more relevant ads. You can change your ad preferences anytime.
Conium maculatum Homeopathic Materia Medica Slide Show Presentation By Dr.Hansraj Salve 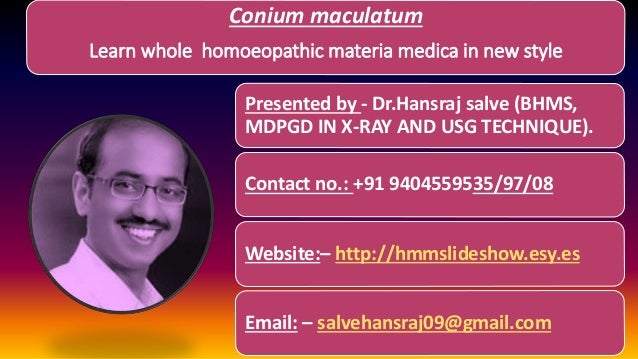 The "Balm of Gilead" for diseases of old maids and women during and after climacteric. Especially for diseases of old men; old maids; old bachelors; with rigid muscular fibre; persons with light hair who are easily excited; strong persons of sedentary habits. Debility of old people; complaints caused by a blow or fall; cancerous and scrofulous persons with enlarged glands; rigid fibre. No inclination for business or study; indolent, indifferent, takes no interest in anything. Memory weak, unable to sustain any mental effort. Morose; easily vexed; domineering, quarrelsome, scolds, will not bear contradiction (Aur.); excitement of any kind causes mental depression. Dreads being alone, yet avoids society (Kali c., Lyc.). Glandular induration of stony hardness; of mammae and testicles in persons of cancerous tendency; after bruises and injuries of glands (compare, Aster. rub.). Breasts sore, hard and painful before and during menstruation (Lac c., Kali c.). Vertigo: especially when lying down or turning in bed; moving the head slightly, or even the eyes; must keep the head perfectly still; on turning the head to the left (Col.); of old people; with ovarian and uterine complaints. Cough: in spasmodic paroxysms caused by dry spot in larynx (in throat, Act.); with itching in chest and throat (Iod.); worse at night, when lying down, and during pregnancy (Caust., Kali br.). Great difficulty in voiding urine; flow intermits, then flows again; prostratic or uterine affections. Menses: feeble, suppressed; too late, scanty, of short duration; with rash of small red pimples over body which ceases with the flow (Dul.); stopped by taking cold; by putting hands in cold water (Lac d.). Leucorrhoea: ten days after menses (Bor., Bov.); acrid; bloody; milky; profuse; thick; intermits. Bad effects: of suppressed sexual desire, or suppressed menses; non-gratification of sexual instinct, or from excessive indulgence. Aversion to light without inflammation of eyes; worse from using eyes in artificial light; often the students' remedy for night work; intense photophobia (Psor.). Sweat day and night, as soon as one sleeps, or even when closing the eyes (Cinch.).

Aggravation. - At night; lying down; turning or rising up, in bed; celibacy.
For more tutorials and updates visit our Website:– http://hmmslideshow.esy.es