Successfully reported this slideshow.
We use your LinkedIn profile and activity data to personalize ads and to show you more relevant ads. You can change your ad preferences anytime.
Single Page Web Application Development with SiouX and AppeX 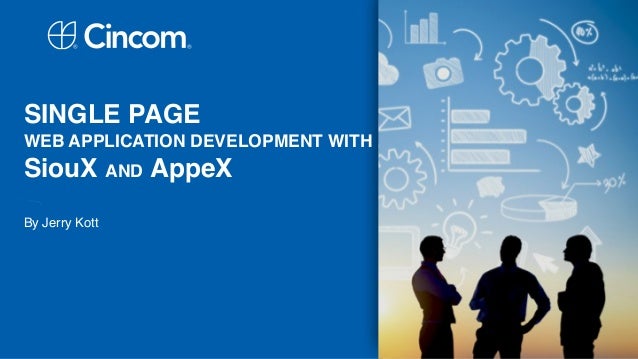 Prior to joining Cincom, Jerry worked as a Smalltalk consultant in a variety of industries including finance, insurance, telecommunications, manufacturing and entertainment. Throughout his career, Jerry has used most of the Smalltalk dialects. He first met Smalltalk/V in his native Czechoslovakia in 1988 while writing his masters theses at the Faculty of Mathematics and Physics, Charles University of Prague. The political upheaval of 1988/1989 led Jerry to leave Czechoslovakia, and after a year in Austria, his family settled in Canada. While working as a programmer analyst at the TD Bank in Toronto, he was reintroduced to Smalltalk in 1993—this time with the intent of staying with it for good. Jerry’s recollection of his falling in love with Smalltalk can be summed up like this:

Day one: This is weird, no source code file?
Day two: This is interesting; I can inspect live objects and send messages to them!
Day three: This is great! I never want to use any other language!

When not programming in Smalltalk, Jerry uses his passion for photography and film by helping independent filmmakers as a cinematographer. He occasionally dabbles as an associate producer and assistant director. Jerry is also a member of Juan de Fuca Search and Rescue, a volunteer emergency response team that services the rugged western coastline of Vancouver Island off the West Coast of Canada. He lives in Victoria, British Columbia with his wife, five chickens and approximately 120,000 bees.