Successfully reported this slideshow.
We use your LinkedIn profile and activity data to personalize ads and to show you more relevant ads. You can change your ad preferences anytime.
Generation Z and Generation Alpha Infographic 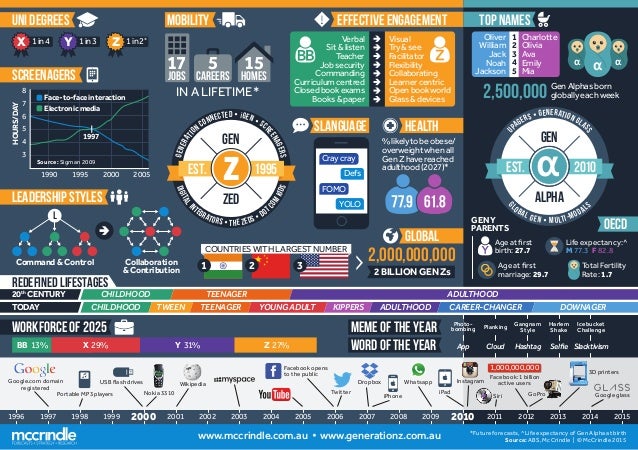 CHARACTERISTICS OF THE EMERGING GENERATIONS
We are in the midst of a generational landmark, as Australia’s “Digital Integrators” (Generation Z) began sitting their final school exams last year, and the first Generation Alpha’s begin their schooling career this year. Below we provide an explanation about each of these generations, and some interesting facts about them.

The students of our world today who are currently at school and university are the children of Generation X, the cohort that follows Generation Y, and who are born between 1995 and 2009. They are Generation Z.

Generation Z are the largest generation ever, comprising around 20% of Australia’s population and almost 30% of the world’s population. Globally there are almost 2 billion of them.

They are the first fully global generation, shaped in the 21st century, connected through digital devices, and engaged through social media.

Following our Gen Zeds are our pre-schooler and kindergarteners of today – Gen Alpha.

Born since the year 2010 they are aged 0-5, they are the children of Gen Y, and there are 1.6 million of them in Australia. They are truly the millennial generation, born and shaped fully in the 21st century, and the first generation that we will see in record numbers in the 22nd century as well. They are logged on and linked up – known as ‘digital natives’. They are the most materially endowed and technologically literate generation to ever grace the planet!

What will Australia look like in 2034, the year when first cohort of Generation Alphas are in their early 20s?

The population of Melbourne will be 5.9 million (that’s larger than the whole of Victoria today).
Australia will have reached 32 million (up from 23 million currently).
The global population will be 8.8 billion (that’s twice what it was when the parents of Generation Alpha were born in the early 1980’s).
India will have surpassed China as the world’s most populous nation.
There will be more Australians aged over 60 than under 20 for the first time in our history (a sign of our ageing population).
Australia’s median age (where half the population is younger and half is older) will be 40. It was 29 when the parents of Gen Alpha were born.
The most common household type will be the couple, no kids households, for the first time ever eclipsing the nuclear family of today (couple with children).