Successfully reported this slideshow.
We use your LinkedIn profile and activity data to personalize ads and to show you more relevant ads. You can change your ad preferences anytime.
Saas State of the Industry Presentation At Small Business Summit 2014 by Bjoern Lasse Herrmann from Compass 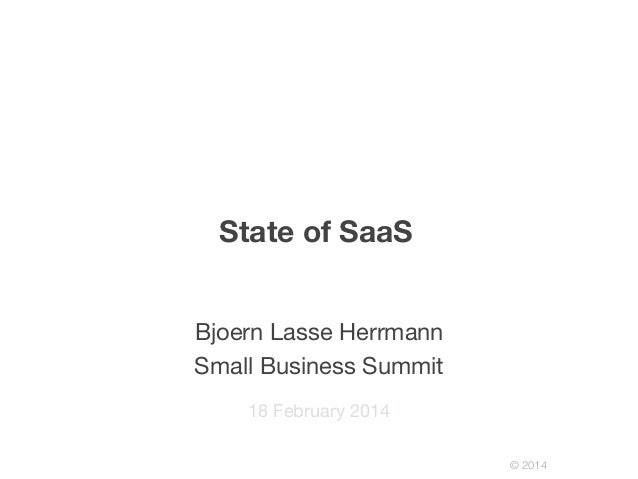 
In the 10-15 years since the birth of SaaS as an industry, it’s now been planted firmly in the mainstream of conversation, but it’s disruptive wave is still getting started.

When we look into Compass data we see that nearly half of SaaS startups have received funding, which indicates a significant amount of investment capital being channeled into the category. There’s a clear reason why. Gartner forecasts the SaaS market will grow at 20% through at least 2020, almost 3 times as fast as software overall, and there remains ample opportunity for greater global penetration over time. Salesforce represents the shining star of possibility, consistently growing at more than 30%.

At the same time, at just 17 billion dollars, the SaaS pool is still relatively small and the field is very crowded. While Compass data indicates that half of SaaS companies are profitable, the statistic also measures a push for profitability over growth, often limiting size. Of all SaaS companies in Compass, only 7% achieve even 10,000 users.

The biggest challenge is distribution. Our data shows SaaS companies rely heavily on direct sales — at nearly twice the rates of every other channel, but can afford only modest sales teams of 1 or 2. The vast majority pay nothing for marketing or advertising.

This means many salespeople out there fighting, one by one, client by client, for the same turf. These crowded market challenges are also driving a push away from SMB audiences and into more lucrative enterprise markets. But it is primarily the packaged software industry titans that dominate SaaS revenue — Intuit, Oracle, Adobe, Microsoft, Google, SAP.

One can think of this as a David versus Goliath scenario, except that the David’s are fighting each other. The Goliath’s may not be as nimble, in many cases their products are inferior, but they have the support of an entire distribution ecosystem — from resellers to channel partners to consultants and trainers — who are dependent on the horse they bet on winning.

Enterprises, then, aren’t just larger small businesses. Their needs run far deeper. Any software solution must integrate effectively with multiple legacy systems. Security is a tremendous concern. Training programs must be rolled out. A small business may make decisions for the moment, but enterprises must have confidence in the long-term viability of the vendor.

All of this goes to reinforce the fact that history tells us, sometimes painfully, that the best product does not always win. The best distribution method does.

So returning to the David side of the equation, what can SaaS businesses do to beat the Goliaths?

Learn more in the presentation and at blog.startupcompass.co