Successfully reported this slideshow.
We use your LinkedIn profile and activity data to personalize ads and to show you more relevant ads. You can change your ad preferences anytime.
Richard Edelman 2010 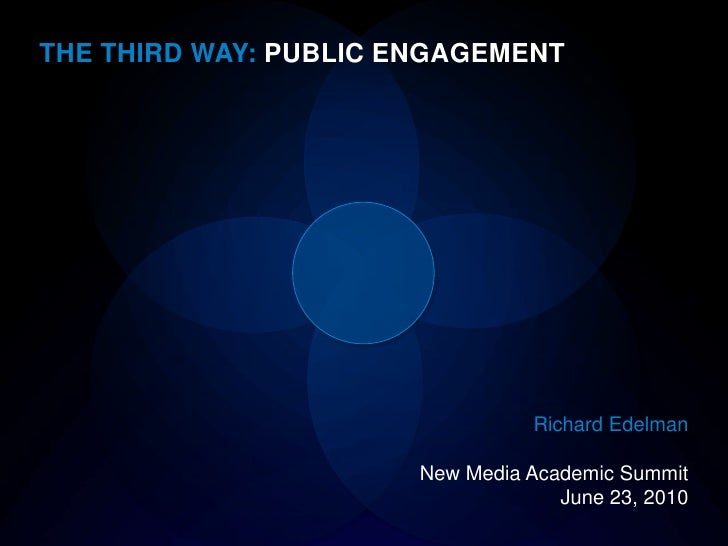 From the post How CEO's will use social media in the future on Mashable http://mashable.com/2010/08/30/ceo-social-media-future/

Today’s CEO is not social. So says Forrester Research’s CEO George Colony. Very few of the CEOs at top companies in the U.S. and the rest of the world have any material presence on the popular social media sites. Colony believes they should be social though, and all signs are pointing to a future filed with CEOs who can speak the language of the people — social media.

While one can only speculate about the future of CEOs and social media, there’s no question that social media plays a huge part in life and the world as we know it right now.

As younger CEOs replace older ones, news consumption habits change and social media continues its trend towards ubiquity, there’s little question that the man (or woman) at the top will need a firm grasp on social media — whether that be for recruiting, scouting, public engagement or social CRM.
The Next Generation of CEOs

When it comes to CEOs, there’s a vast disparity between the young ones heading up startups and the more seasoned CEOs running the world’s most powerful companies. That disparity is social media — the young are more versed than the old. The difference between the two groups can be attributed to different generations and different attitudes around content and information meant for the public and private domains.

No one is predicting that the venerable CEOs will be booted from their lofty perches for lack of a Twitter (Twitter) account. In fact, younger CEOs with a predilection and savvy for social media may find their visibility to either be a contributing factor to their rise or a liability once they graduate to bigger, hence more vulnerable, publicly traded companies.

Let’s have a gander at some stats on the status quo. In April, Colony let it be known that most CEOs are not social. In fact, by his own research and calculations, Colony has concluded that, “None of the CEOs of Fortune Magazine’s top 100 global corporations have a social profile.”

Social media abstinence even appears to extend to CEOs of tech companies. “Eric Schmidt of Google is an infrequent Twitterer and is not a blogger; Steve Ballmer at Microsoft has no blog and no Twitter account; Michael Dell is on Twitter but is not an external blogger … Steve Jobs of Apple, and Larry Ellison of Oracle have no Twitter, Facebook (Facebook), LinkedIn (LinkedIn), or blog presences that we could find.”

His findings paint a bleak present tense. In the coming years, however, there will be a changing of the guard that favors social media over silence.
We Live in a Social Media World

Let us pause and reflect on the fact online users spend 22.7% of their time on social networking sites. That’s twice as much time as we spend on any other online activity. Consider where people are getting their news today. More and more, it’s not through direct sources like USA Today, The New York Times, or TV broadcasts, but through social networks.

Plus, industry is social. In the future, every company, no matter how small or how big, will be influenced and impacted by social media internally or externally. In the entertainment industry, for instance, social media has the potential to significantly bump up live television viewing audiences. Network executives such as Greg Goldman, formerly an executive director at ABC and now CCO at Philo, are nearly certain it’s happening now and will become more obvious with time.

Take what you know about the world today and then ask yourself, can a CEO remain relevant if they’re not versed in the new language of the people they serve?