Successfully reported this slideshow.
We use your LinkedIn profile and activity data to personalize ads and to show you more relevant ads. You can change your ad preferences anytime.
12 Take Aways - Managing the Unmanageable 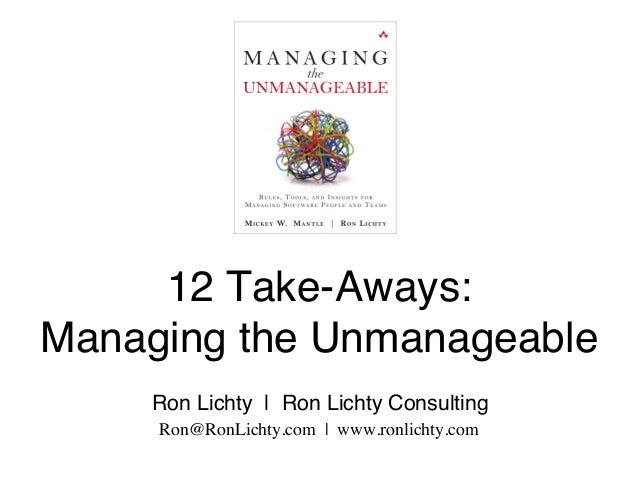 About 95 percent of programming managers had no management training before being tapped to manage. Ron Lichty and his co-author Mickey W. Mantle, both former programmers, didn't either.

About half of managers never get any training in managing. Ron and Mickey were lucky enough to work for companies like Apple and Pixar that provided some general management training. But little to none of it was specific to managing programmers, or to managing programming teams.

The struggle to manage programmers and programming teams motivated years of weekend breakfasts for Ron and Mickey, during which they traded insights - on the challenges they faced - and solutions they had used and seen - the kinds of stuff they’d wished they'd had when they started managing.

Sharing insights and best practices with each other for a decade led them to realize they wanted to share what they had learned. And that led to spending eight years of free time writing their Addison Wesley book, Managing the Unmanageable: Rules, Tools, and Insights for Managing Software People and Teams, http://www.ManagingTheUnmanageable.net. To their own hard-won experience, they added the best of the treasure troves they'd each collected of rules of thumb and nuggets of wisdom from their peers and programming manager thought leaders around the world.

Reviewers have repeatedly compared Managing the Unmanageable to The Mythical Man-Month and Peopleware, the classics on software development challenges.

Ron Lichty has been managing and, more recently, consulting in managing software development and product organizations for over 25 years at companies like Apple Computer, Fujitsu, Charles Schwab, Avenue A | Razorfish, Forensic Logic, Stanford, Check Point, MediaBrands, and dozens of startups of all sizes. Before that, as a programmer, he coded compiler code generators, was awarded patents for compression and security algorithms he designed and coded for embedded microcontroller devices, wrote two widely used programming texts, and developed the computer animation demo that Apple used to launch and sell a next-generation line of PCs. He has mostly managed development teams and organizations, but also product managers, project managers, testers, designers, … pretty much everyone on product teams.

The primary focus of his consulting practice, these last 5 years, has mirrored what he did as a manager: untangling the knots in software development. His career grew to VP Eng, VP Product and CTO roles.