Successfully reported this slideshow.
We use your LinkedIn profile and activity data to personalize ads and to show you more relevant ads. You can change your ad preferences anytime.
World Enzymes Industry 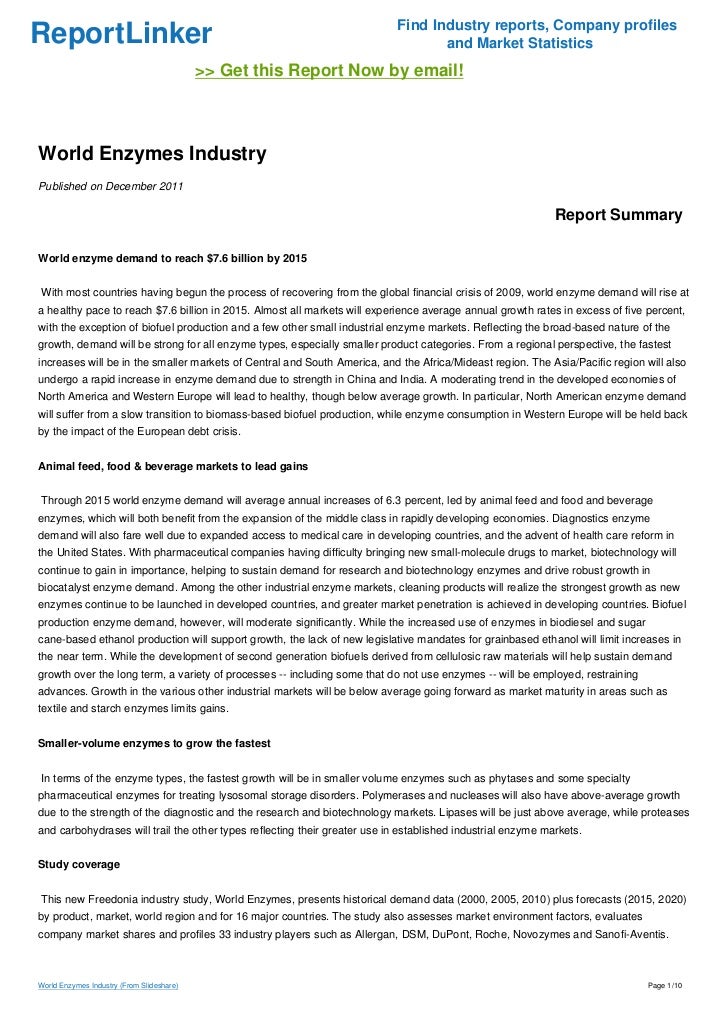 World enzyme demand to reach $7.6 billion by 2015 With most countries having begun the process of recovering from the global financial crisis of 2009, world enzyme demand will rise at a healthy pace to reach $7.6 billion in 2015. Almost all markets will experience average annual growth rates in excess of five percent, with the exception of biofuel production and a few other small industrial enzyme markets. Reflecting the broad-based nature of the growth, demand will be strong for all enzyme types, especially smaller product categories. From a regional perspective, the fastest increases will be in the smaller markets of Central and South America, and the Africa/Mideast region. The Asia/Pacific region will also undergo a rapid increase in enzyme demand due to strength in China and India. A moderating trend in the developed economies of North America and Western Europe will lead to healthy, though below average growth. In particular, North American enzyme demand will suffer from a slow transition to biomass-based biofuel production, while enzyme consumption in Western Europe will be held back by the impact of the European debt crisis. Animal feed, food & beverage markets to lead gains Through 2015 world enzyme demand will average annual increases of 6.3 percent, led by animal feed and food and beverage enzymes, which will both benefit from the expansion of the middle class in rapidly developing economies. Diagnostics enzyme demand will also fare well due to expanded access to medical care in developing countries, and the advent of health care reform in the United States. With pharmaceutical companies having difficulty bringing new small-molecule drugs to market, biotechnology will continue to gain in importance, helping to sustain demand for research and biotechnology enzymes and drive robust growth in biocatalyst enzyme demand. Among the other industrial enzyme markets, cleaning products will realize the strongest growth as new enzymes continue to be launched in developed countries, and greater market penetration is achieved in developing countries. Biofuel production enzyme demand, however, will moderate significantly. While the increased use of enzymes in biodiesel and sugar cane-based ethanol production will support growth, the lack of new legislative mandates for grainbased ethanol will limit increases in the near term. While the development of second generation biofuels derived from cellulosic raw materials will help sustain demand growth over the long term, a variety of processes -- including some that do not use enzymes -- will be employed, restraining advances. Growth in the various other industrial markets will be below average going forward as market maturity in areas such as textile and starch enzymes limits gains. Smaller-volume enzymes to grow the fastest In terms of the enzyme types, the fastest growth will be in smaller volume enzymes such as phytases and some specialty pharmaceutical enzymes for treating lysosomal storage disorders. Polymerases and nucleases will also have above-average growth due to the strength of the diagnostic and the research and biotechnology markets. Lipases will be just above average, while proteases and carbohydrases will trail the other types reflecting their greater use in established industrial enzyme markets. Study coverage This new Freedonia industry study, World Enzymes, presents historical demand data (2000, 2005, 2010) plus forecasts (2015, 2020) by product, market, world region and for 16 major countries. The study also assesses market environment factors, evaluates company market shares and profiles 33 industry players such as Allergan, DSM, DuPont, Roche, Novozymes and Sanofi-Aventis.