Successfully reported this slideshow.
We use your LinkedIn profile and activity data to personalize ads and to show you more relevant ads. You can change your ad preferences anytime.
How to Build a Truth Engine 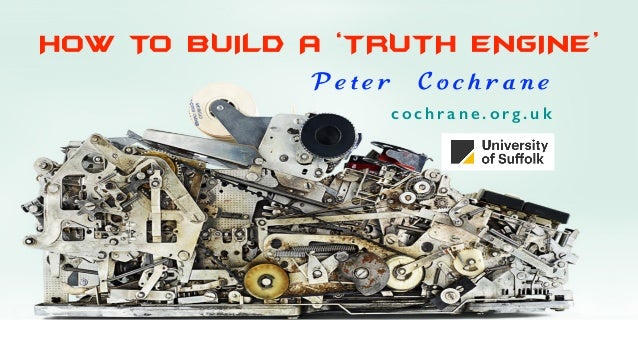 How to Build a Truth Engine

Civilizations live or die by the quality of their fundamental truths. Governments, legal systems, commerce, industry, engineering, science, and education dependent upon verifiable and hard-won knowledge that has been tested and continually honed as new discoveries and revelations based on tested evidence and experience have emerged. However, truth, facts and knowledge are now under deliberate attack and suffering accelerating rates of distortion and corruption.

Today; establishing ‘the truth’ and/or applying verifiable facts and knowledge is no longer easy or straightforward. Modern media, the internet, social networks, has given everyone a voice, and a right to express their opinion even if they are totally ignorant. So, plagiarism, errors, and deliberate falsifications have become a new tool for some political and commercial operations. In effect, it has become a new form of information warfare!

Truth is no longer something we can simply take for granted; it is something we have to continuously check and verify. Populations find it far easier to unthinkingly accept simple (and often crude) misrepresentations and lies from anonymous sources, bogus median other pernicious sources including criminals, rogue states and corrupt political groups. And at the click of a key, they can distribute the falsehoods to millions of screens where quantity and not quality define a new truth!


With the leader for the free world leading the charge into this ‘Post Truth Dystopia’ it seems that every dictator and despot feels emboldened to leverage this new degree of freedom. Even some regular politicians, bankers and business leaders are straying from the ‘straight-and-narrow’ supported by portions of the media. This is not only dangerous it can only lead to an indeterminate transformation of societies and the destruction of democracies. It really is a big step toward dystopian futures that may be irreversible!

So what can be done? How can we counter this? Fight-fire-with-fire; use the same technologies employed by the liars and distorters of the truth would seem to be the obvious course. And this, in turn, leads to the notion of a ‘Truth Engine’ capable of purging the net, checking the veracity of every media report, blog and social posting in text, voice, video, pic, and any other format in near real-time….but is it even possible? This slide set suggests that it is and many of the essential components already exist!

How to Build a Truth Engine