Successfully reported this slideshow.
We use your LinkedIn profile and activity data to personalize ads and to show you more relevant ads. You can change your ad preferences anytime.
Secrets of Kick Ass Teams 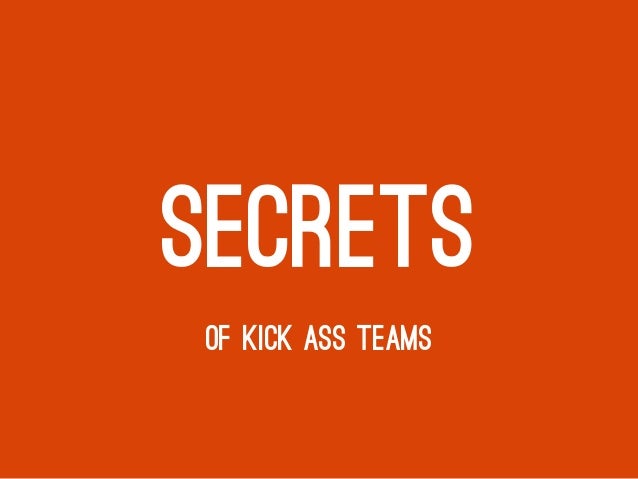 They’ve all had these 4 characteristics in common
1. Great leadership
2. No egos
3. No old guy vs. new guy mentality
4. Honest and Open Feedback

Great Leadership.
Great leaders are humble at their core and are willing to do any job, no matter how small, to achieve the objective.

They’re passionate about what they do and this permeates the organization.

Their integrity is beyond reproach; they put the unit ahead of themselves, they’re kind, empathetic, but can be stern when warranted. They demand excellence and they set the standard for work ethic and live the team’s morals and values.

Want to lead a winning team? Look in the mirror, it begins and ends with you.

Championship teams’ players leave their egos at the door. Their members spread the accolades and shoulder the blame when things go wrong.

Want to be a great teammate? Do your best, keep your head down, encourage your teammates and check your ego at the door.

If you must complain, do so to your spouse, friends or family, but don’t burden your cohorts with your hurt feelings or bruised ego.

My old coach was right. Nobody wants to hear how rough the water is, they just want to us to get in the boat and start rowing.

Hazing rituals are bad. Period. They shame, humiliate and dehumanize. Who wants to be part of an organization that the price of admission is shame?

If a chain is only as strong as its weakest link, then it makes sense to strengthen all the links.

The best teams take the new guys, put their arms around them and bring them up to standard through guidance, drill, and instruction.

Duke Men’s Basketball Coach Krzyzewski discusses this very thing in his book, Leading With The Heart. Each year he has to welcome a new group of freshmen to the team. On day one he tells them the standards and pairs them with a senior.

They set the example.

Finally, honest and open feedback is the norm in highly functional squads.

Units where members can’t speak up, where poor performance is allowed and accepted and where individuals hide in the shadows are dysfunctional, and regardless of the talent, will rarely if ever be “championship” teams.

First-place unit members pursue timely, consistent, honest and open feedback among each other. It’s healthy and everyone knows it will ultimately make the team better.