Successfully reported this slideshow.
We use your LinkedIn profile and activity data to personalize ads and to show you more relevant ads. You can change your ad preferences anytime.
The Benefits and Implications of Learning English through Facebook Groups 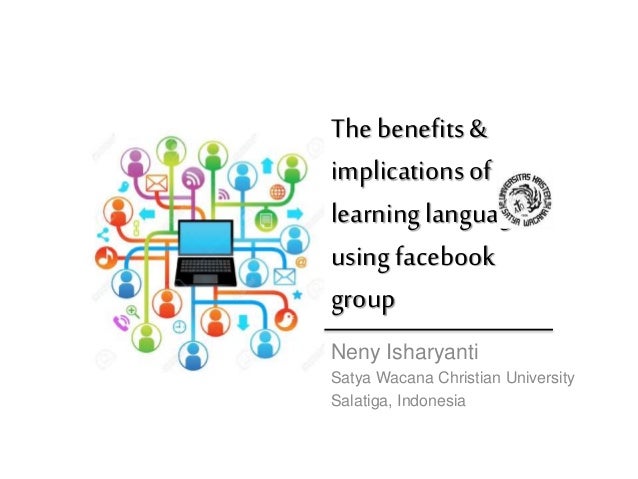 The Benefits and Implications of Learning English through Facebook Groups

Abstract
The benefits of Social Networking Sites (SNSs) for academic purposes have been extensively researched. In the studies of social capital and how through SNSs social capital can be formed and maintained, some studies have suggested that SNSs may build strong network and such network could benefit students in terms of educational attainment, achievement, and psychosocial factors (Ye, 2006; Ellison, Steinfield, & Lampe, 2007; Phua & Jin, 2011; Lin, Peng, Kim, Yeun Kim, & LaRose, 2012; Tamam, 2013) . However, the studies also found some barriers and implications of SNSs in the process of learning.
Most of the studies in social capital in SNSs were conducted in the context of formal education settings, in which SNSs were treated either as a part of certain courses, or relevant to students' formal education status. This study is going to be conducted in the context of informal discussion in English learning Facebook groups, with various types of members, both formal students and those who are interested in learning English. In particular, the study is going to employ the framework of social capital and actor-network theory in analyzing the discourse among the learners in order to find out the influencing factors and types of social capital that may be beneficial in learning English.
Keywords
Social Networking Sites, Social Capital, Actor-Network Theory, Computer-Mediated Discourse Analysis, Learning English
Bio
Neny Isharyanti is currently a lecturer at the English Education program of Faculty of Language and Literature, Satya Wacana Christian University, Salatiga, Indonesia. Her research interests include Computer-Mediated Discourse Analysis and sociolinguistics.

The Benefits and Implications of Learning English through Facebook Groups