Successfully reported this slideshow.
We use your LinkedIn profile and activity data to personalize ads and to show you more relevant ads. You can change your ad preferences anytime.
Apollo: Scalable & collaborative curation of genomes - Biocuration 2015 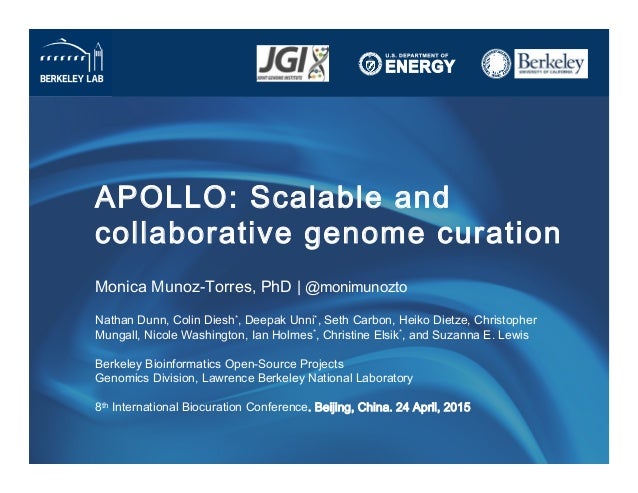 Apollo is actively used within a variety of projects, including the initiative to sequence the genomes of 5,000 Arthropod species (i5K), and will become essential to the thousands of genomes now being sequenced and analyzed. Researchers from nearly 100 institutions worldwide are currently using Apollo on distributed curation efforts for over sixty genome projects across the tree of life; from plants to echinoderms, to fungi, to species of fish and other vertebrates including human, cattle (bovine), and dog. We are training the next generation of researchers by reaching out to educators to make these tools available as part of curricula, offering workshops and webinars to the scientific community, and through widely applied systems such as iPlant and DNA Subway. We are currently integrating Apollo into an annotation environment combining gene structural and functional annotation, transcriptomic, proteomic, and phenotypic annotation. In this presentation we will describe in detail its utility to users, introduce the architecture to developers interested in expanding on this open-source project, and offer details of our future plans.