Successfully reported this slideshow.
We use your LinkedIn profile and activity data to personalize ads and to show you more relevant ads. You can change your ad preferences anytime.
Exploiting Edinburgh's Guide to PHARMACOLOGY database as a source of protein design information for synthetic biology. 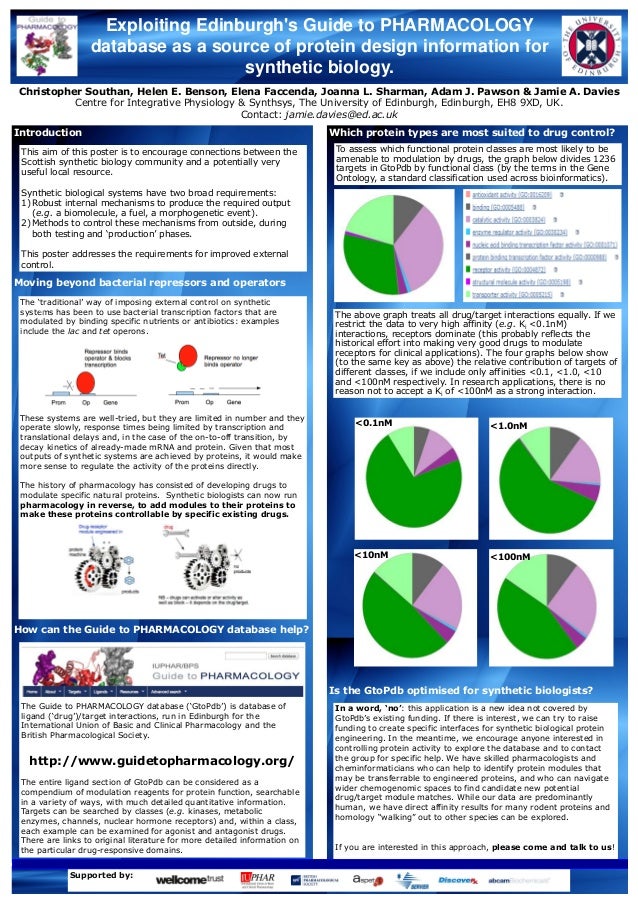 Exploiting Edinburgh's Guide to PHARMACOLOGY database as a source of protein design information for synthetic biology.

Abstract: Synthetic creation of new biological systems typically incorporates pathways and signaling modules from known protein building blocks. Testing the models underpinning the synthetic engineering thus needs the experimental manipulation of individual proteins, for example, ablating a specific enzyme activity via RNAi, SNP mutation, or knockout. However, the option of small-molecule inhibition as the system perturbation has the advantages of 1) rapid onset 2) dose-response 3) analog testing for structure-activity relationships, 4) exploring mixtures for combinatorial effects 5) pulsing and reversal by wash-out. 6) accurate measurements of added substances and 7) a vast precedent of published results in natural systems from medicinal chemistry, pharmacology, and chemical biology. For the synthetic biologists the GToPdb1 can thus be considered as compendium of the latter. It encompasses an interaction matrix between ~4000 small molecules and ~1000 human proteins with a focus on drugs, clinical candidates, research compounds and peptide ligands These not only have ~ 10,000 mapped binding constants but also the spectrum of documented modulation extends across enzymes, receptors, channels and transporters. It thus becomes an increasingly plausible option to choose a “Lego protein” from GToPdb as a synthetic system component that can have experimentally useable activity probes available from chemical vendors. Even if it does not currently have a suitable target-probe pair, as knowledge base (and expertise resource via the curation team who populate it) GToPdb is an ideal starting point from which to walk out to wider chemogenomic spaces. For example, while an approved drug and its target might seem a logical choice, analogs from the lead series or different chemotypes from which the drug was optimized, or even failed in development, can have superior probe-like properties for in vitro experiments (e.g. be more potent, specific and soluble). The GToPdb facilitates access to such compound data via curated papers and patents.

Exploiting Edinburgh's Guide to PHARMACOLOGY database as a source of protein design information for synthetic biology.