Successfully reported this slideshow.
We use your LinkedIn profile and activity data to personalize ads and to show you more relevant ads. You can change your ad preferences anytime.
Aerospace Competitors and Several Compromised Policy Makers Behind Continuing Efforts to Kill Indispensable C-17, and Boeing Itself; Sets Stage for US Air Force Acquisition of Airbus/EADS A400M, Continued Retrofit of Ancient Lockheed-Martin C-5 Galaxy 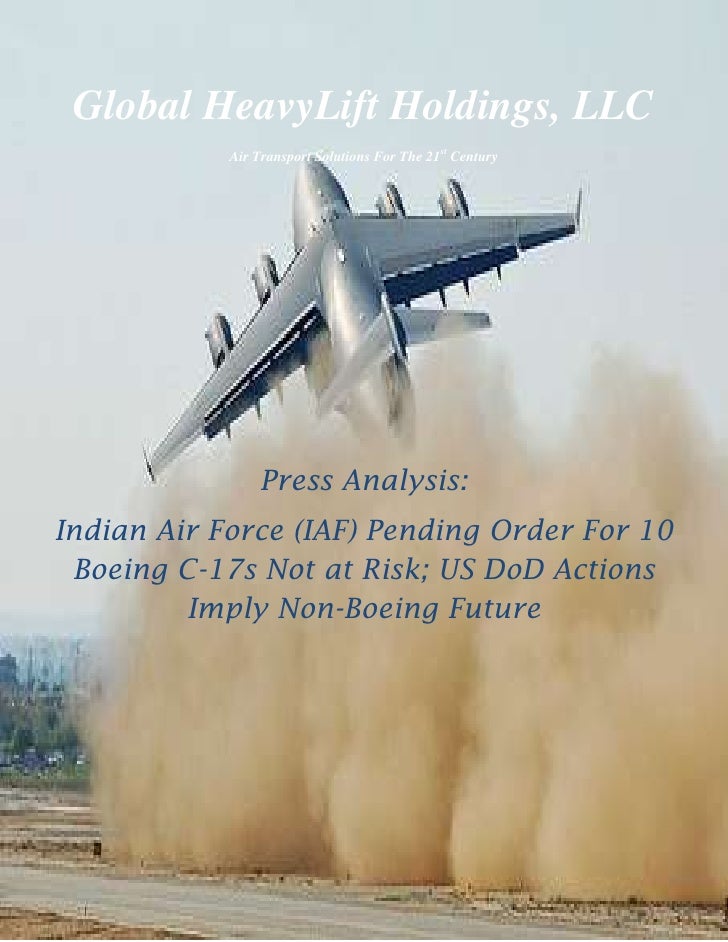 Bloomfield Hills, MI, UPDATE September 28,2010 - According to Congressional sources, Boeing C-17 Funding is not included in the first markup of the 2011 Defense Authorization Bill which failed to make it to the floor subsequent to partisan objections to its content. At this juncture, it will in all likelihood not come up for final approval until January 3, 2011.

It is our understanding that aerospace competitors to Boeing - Lockheed-Martin and Airbus/EAD - in conjunction with several policy makers (who, by their inexplicable and irresponsible efforts to kill the operationally superior and provably cost effective C-17 Globemaster III, have ostensibly been compromised) have been, and continue to be, behind the full range of activities within government, industry and media to terminate C-17 production.

It’s not difficult to understand why: With C-17 out of the way, Lockheed-Martin will reap up to USD15 billion in C-5 - an arguably mission obsolete airlifter with a long history of reliability problems that continue to this day - modernization revenues, and up to 5 billion in C-130J orders both from the US AirForce and NATO/de facto NATO allies; Airbus/EADS will have an open door to attempt the placement of 200 overweight (12 tons at moment giving it essentially the same approx. 25 ton load capacity of C-130J) overcost (current acquisition costs may exceed that of a new C-17, prompting South Africa to withdraw its order) yet-to-be-operational A-400M - an order valued at up to 40 billion based on current projected acquisition costs, and renewed confidence and vigor to pursue 35-40 billion (100 billion over life of program) US AirForce KC-X aerial tanker replacement program.

The strategy in place is structured not only to wrest airlifter and tanker program participation from Boeing, but to set the stage for the company’s rapid elimination from existence. Thus, leaving the military and commercial aircraft sector to Lockheed-Martin and Airbu/EADS and an increasingly unstable geo-political landscape (within which the duality of asymmetric/conventional war scenarios is a constant) while simultaneously bereft of Boeing profound technological and production capacity should its enemies succeed.

This must be called what it inarguably is: An issue of national security demanding response designed to ensure continuance of Boeing, a core element of the US defense industrial base.

Bloomfield Hills, MI, May 26, 2010 (PressReleasePoint) -- Global HeavyLift Holdings, LLC, a Defense Logistics Agency (DLA www.ccr.gov) entity based in Michigan, believes it is appropriate to address, yet again, the continuing attacks, misstatements and outright analytical/factual errors carried by multiple media outlets globally against Boeing C-17. These are largely based on comments by Secretary of Defense Dr. Robert Gates, elements of the USAF, and others demanding an end to its production.

The drumbeat of anti-C-17 commentary in US, European, Indian, Pakistani and other global news mediums; a strike at Boeing Long Beach by union workers and the observably large leap in logic suggesting the Globemaster III will be terminated as a result, appear to be part of a well-coordinated effort -- again -- to render as self-fulfilling prophecy SECDEF Dr. Robert Gates' unfounded insistence on ending production of the world's most successful strategic/tactical airlifter.