Successfully reported this slideshow.
We use your LinkedIn profile and activity data to personalize ads and to show you more relevant ads. You can change your ad preferences anytime.
Social Cohesion Radar 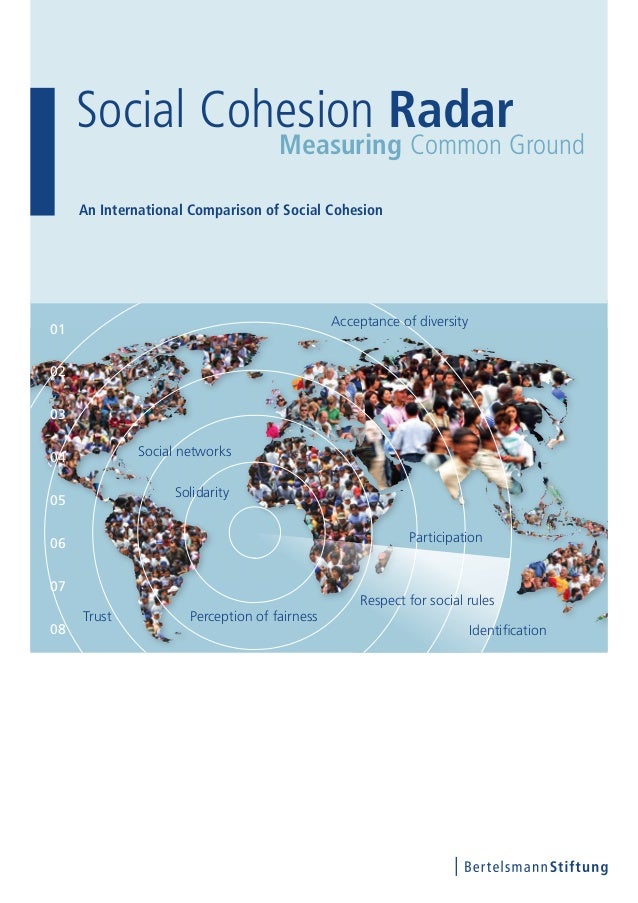 Denmark, Norway, Sweden and Finland have the highest levels of social cohesion, followed by Canada, the US, Australia, and New Zealand, according to the Social Cohesion Radar, a study released today by the Bertelsmann Stiftung and Jacobs University in Bremen, Germany. The study, which examines 34 countries in the EU and the OECD, also concludes that Lithuania, Latvia and the southeast European countries of Bulgaria, Greece and Romania suffer from low social cohesion.

Social cohesion is defined as the special quality how members of a community live and work together. A cohesive society is characterized by resilient social relationships, a positive emotional connectedness between its members and the community and a pronounced focus on the common good.

The report finds that the three most important socio-economic factors associated with social cohesion are national wealth as measured by gross domestic product (GDP), a country's income gap as measured by the Gini coefficient, and its level of development towards a modern information society as measured by the Knowledge Index.

First, greater national wealth has a correlation to greater social cohesion. Second, a country's income gap has a moderately strong and inverse correlation to social cohesion, indicating that less equal societies tend to be less cohesive. Few countries with a large income gap (e.g., the UK or Ireland) manage to avoid below-average scores on the social-cohesion index. Third, a country's level of development towards a modern information society has a more profound effect on social cohesion than national wealth. The higher a country's ranking on the Knowledge Index, which measures the diffusion of modern communication technology, the more likely that country is to show high social cohesion.

The study dispels the popular belief that immigration is intrinsically harmful to social cohesion. The share of immigrants in a country's population shows no statistically significant effect on social cohesion.