Successfully reported this slideshow.
We use your LinkedIn profile and activity data to personalize ads and to show you more relevant ads. You can change your ad preferences anytime.
RECONSTRUCTION OF LAKES IN BANGALORE 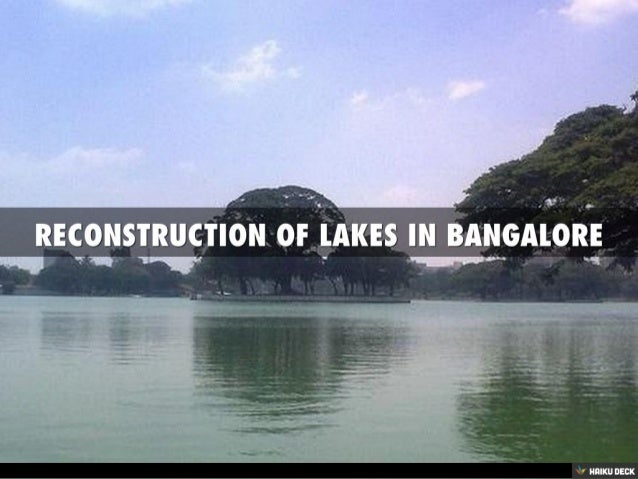 5Tanks were constructed earlier to store water mainly for agricultural activity and for drinking water, bathing, washing of cloths and animals, gardening etc. Agricultural activities using water from lakes in Bangalore like ; Ulsoor Lake, Hebbal Lake, Sankey Tank, Akkithimmanahalli Tank, Sampangi Tank, Miller Tank, etc were discontinued due to urban development of lands all round the lakes, which were put to use for residential and other urban purposes.

When the urban area was small, water from these lakes were used for water supply to the residents. When the urban areas expanded with more population, the quantity of water from these lakes was not adequate. Reservoirs and dams were constructed to meet the requirement of large quantity of water like ; Hesarghatta Reservoir and Thippagondana Halli Reservoir. When water is not drawn for drinking water supply, they continue as lakes for environmental purpose, charging of underground water, and environmental improvement.

Lands along the natural valleys feeding rain water to the lakes, and government lands attached to the lakes are being encroached upon due to its potential for urban development. Builders, politicians, influential persons and land grabbers were found to be involved according to the enquiry reports and press reports. These encroachments reduced the open areas in the city and further tree planting is affected. Inaction by the officials /agencies to prevent the new encroachments and removal of existing encroachments has resulted in reduction of flow of rain water to the lakes. Reduced flow to Thippagondanahalli and Hesarghatta reservoirs are mainly mentioned in the media reports to cite some examples.

The natural valleys feeding rain water to the lakes are used by the City Corporation as major storm water drains (SWD). Debris and garbage are dumped in the major, minor, and road side storm water drains which affect the flow of rain water to the lakes. Due to all the above reasons, the capacity of the lakes is reduced, and during heavy rains low lying areas like; H.S.R. Layout, Koramangala, Viveknagar, Shivajinagar,