Successfully reported this slideshow.
We use your LinkedIn profile and activity data to personalize ads and to show you more relevant ads. You can change your ad preferences anytime.
Extracellular matrix 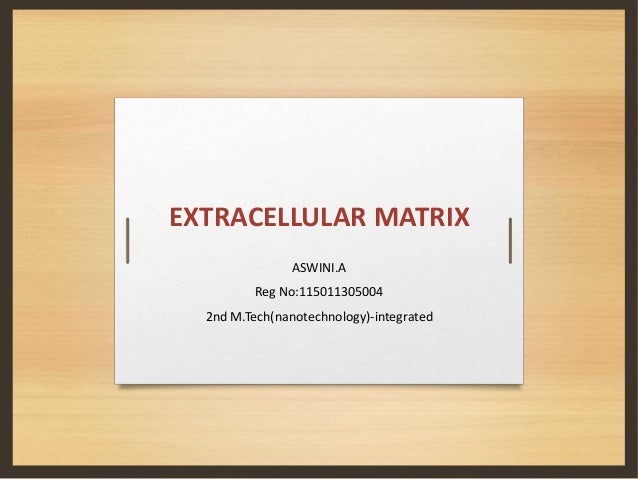 The Extracellular Matrix
Living tissues are not just accumulations of tightly packed cells. Much of a tissue's volume is made up of extracellular space ('extra-' meaning 'outside' or 'beyond,' as in 'extraterrestrial'). This void is filled with a complex meshwork called the extracellular matrix.

The extracellular matrix is made up of proteoglycans, water, minerals, and fibrous proteins. A proteoglycan is composed of a protein core surrounded by long chains of starch-like molecules called glycosaminoglycans.
Fibrous Proteins
Several types of fibrous proteins, including collagen, elastin, fibronectin, and laminin, are found in varying amounts within the extracellular matrix of different tissues. These proteins are produced by fibroblasts, but they aren't secreted in their finished form. Rather, they're released as 'precursor' molecules; their subsequent incorporation into the extracellular matrix is guided by the fibroblasts in accordance with the functional needs of a particular tissue.

Collagen is a strong, stretch-resistant fiber that provides tensile strength to your tissues. It's the most abundant protein in the human body. Collagen is the principle constituent of your tendons and ligaments and provides support for your skin. When you sustain an injury to your skin, collagen is the stuff that heals the wound and forms the scar. There are at least a dozen different types of collagen in your body, all adapted to the specific needs of the tissues where they're found.

Elastin is a stretchy and resilient protein. Much like a rubber band, elastin permits tissues to return to their original shape after they've been stretched. Ultraviolet light damages elastin fibers and interferes with their reconstruction, which accounts for the sagging and wrinkling seen in skin that has been chronically exposed to sunlight.

Fibronectin is secreted from fibroblasts in a water-soluble form but is quickly assembled into an insoluble meshwork, which serves several functions. Other cells use the fibronectin matrix to migrate through a tissue, which is particularly important during embryonic development; fibronectin helps position cells within the extracellular matrix; and fibronectin is necessary for cellular division and specialization in many tissues.

Laminin forms sheet-like networks that serve as the 'glue' between dissimilar tissues. It is the principle protein in basement membranes, which are present wherever connective tissue contacts muscle, nervous, or epithelial tissue